Meet Ruby Bridges, The Civil Rights Icon Who Made History At Age Six

Wikimedia CommonsFederal marshals escort Ruby Bridges to school to protect her from a racist mob in 1960.

Ruby Bridges was just six years old when she made history in 1960. As the first Black student to attend the all-white William Frantz Elementary School in New Orleans, Bridges stepped right into the forefront of the civil rights movement. But sadly, the school was far from welcoming.

On her first day of the first grade, Bridges was greeted by a racist mob who threatened to kill her. Since she was just a child, Bridges could barely understand what was going on and at first didn’t even realize that the crowd was angry at her. But before long, the harassment began to frighten her — especially since it lasted throughout the whole school year.

“They would bring this tiny baby’s coffin and they put a Black doll inside of it,” Ruby Bridges, who is still alive today, recalled of the experience. “They would march around the school with this coffin and I would have to pass them to get inside of the building. It stuck with me for a very, very long time.”

This is the story of Ruby Bridges, the courageous little Black girl who desegregated a white elementary school in the South.

Who Is Ruby Bridges? 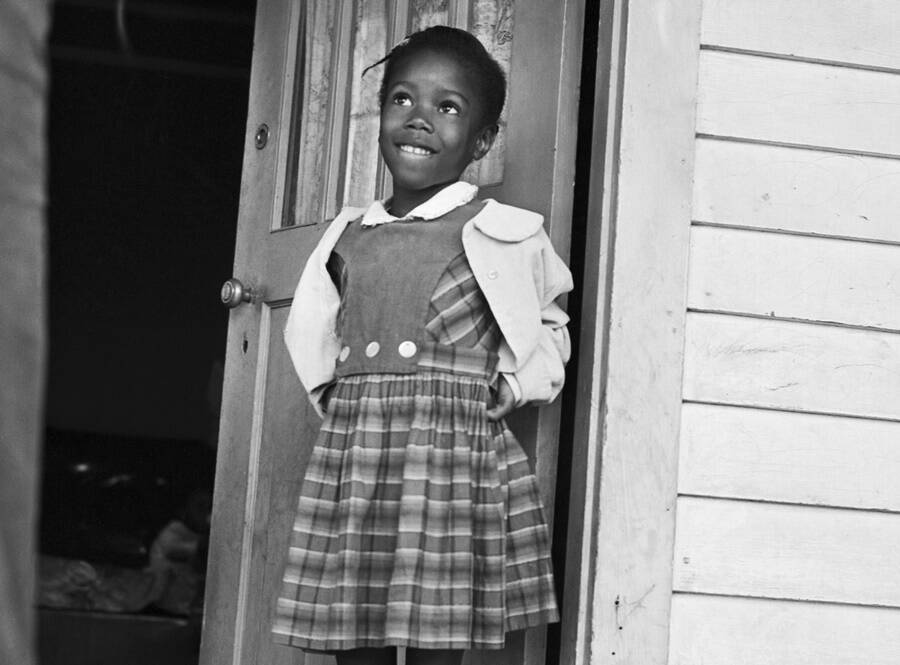 Ruby Bridges was born on September 8, 1954, to Lucille and Abon Bridges, who were farmers in Tylertown, Mississippi. Just a few months earlier, the landmark Supreme Court ruling Brown v. Board of Education had legally ended racial segregation in public schools. The Bridges family didn’t know it yet, but this ruling would have a huge impact on their lives.

Despite Brown v. Board, many schools remained racially segregated. In fact, Bridges herself attended a segregated kindergarten once her family relocated to New Orleans. However, Black families in the city pressured government officials to follow the ruling. And in 1956, Judge J. Skelly Wright ordered the Orleans Parish school board to desegregate the city’s schools.

Though segregationists in the government challenged Wright, they faced setbacks at every turn. However, they were able to convince Wright that Black students would need to apply to transfer to white schools (rather than the other way around). The goal of this requirement, as noted by the Equal Justice Initiative, was to limit desegregation as much as possible.

Still, 137 Black students applied to transfer to white schools. Only five were accepted, and one of them was Ruby Bridges.

At first, Bridges’ parents hesitated to allow her to attend a white school. Considering the anti-civil rights protests that had already broken out, it’s no wonder why Bridges’ parents feared for their daughter’s safety.

Furthermore, they soon learned that Bridges would be the only Black student at the all-white William Frantz Elementary School. The few other Black students who were eligible to transfer either chose to stay at their Black schools or they were transferred to other newly integrated schools. So in many ways, Bridges would be on her own.

But ultimately, Bridges’ mother decided that they wouldn’t waste the opportunity. She was determined that her daughter would have a better education than her parents.

A Historic Day In School Desegregation

Ruby Bridges made history when she desegregated a school in New Orleans.

On November 14, 1960, six-year-old Ruby Bridges made history as she walked toward William Frantz Elementary School. But her first day was unusual in several ways — and she had trouble figuring out why.

First off, Bridges was escorted to the school by four federal marshals — something that certainly never happened back when she was in kindergarten. Secondly, Bridges was met by a screaming mob of angry white protesters standing just outside her classroom.

Unbeknownst to Bridges, a local citizen’s council had encouraged people to “do something” before “burr-heads are forced into your schools.” As a result, an angry mob of white picketers crowded the entrance of the school, holding signs with racist messages and segregationist slogans. The mob screamed death threats at Bridges as she passed by.

Bridges was barely old enough to understand what was happening.

“I saw barricades and police officers and just people everywhere,” Bridges, now 66, recalled. “And when I saw all of that, I immediately thought that it was Mardi Gras. I had no idea that they were here to keep me out of the school.”

After Bridges finally made her way into the school, she was escorted to the principal’s office, where she stayed for most of the day. Meanwhile, furious white parents began to pull their students out of school one by one. By the end of the week, just three white families remained at William Frantz Elementary. And none of the children shared a classroom with Bridges. 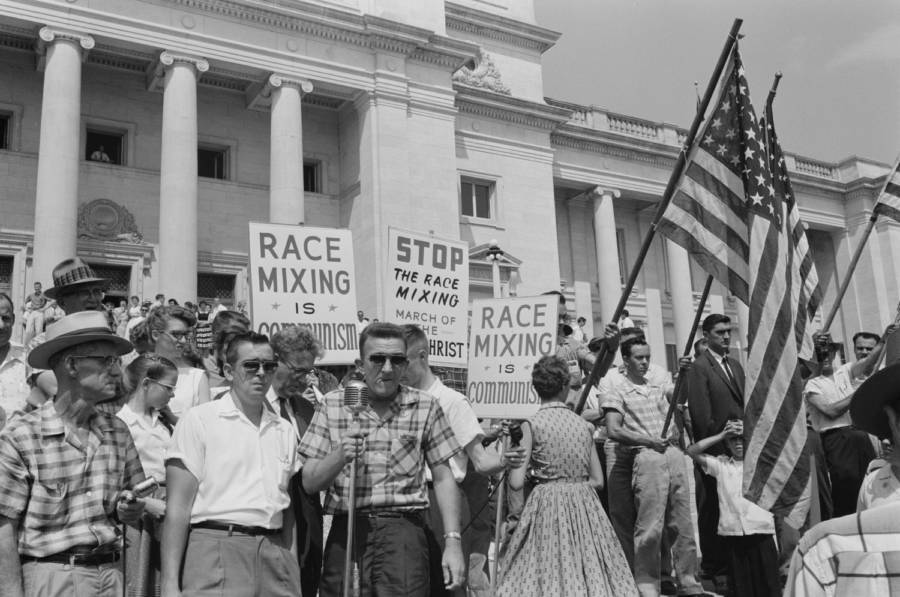 Library of CongressWhite segregationists protest integration at the Arkansas State Capitol in 1959.

On Ruby Bridges’ second day of class, she found herself largely alone in the school. “By the time I got back the second day and was escorted to my classroom,” Bridges recalled, “the building was totally empty. And I remember thinking, you know, my mom has brought me to school too early.”

The students and parents weren’t the only ones who had left the school in protest. All the teachers — except for one, Barbara Henry — refused to teach Bridges. And so throughout the year, Bridges was Henry’s only pupil. “Being in an empty classroom just my teacher and myself,” Bridges said, “I constantly was trying to figure out why was I the only child in the whole school.”

It wasn’t only Ruby Bridges who suffered for her act of bravery. After she began attending the white school, her father lost his job and a local grocery store refused to sell food to her family.

But Bridges made it through the tumultuous year and then began the second grade with relative normalcy. By that point, there were other kids in her class — mostly white students but a few others who were Black. And the angry crowds outside were finally gone. Desegregation continued as the civil rights movement took off in the 1960s.

The Legacy Of Ruby Bridges 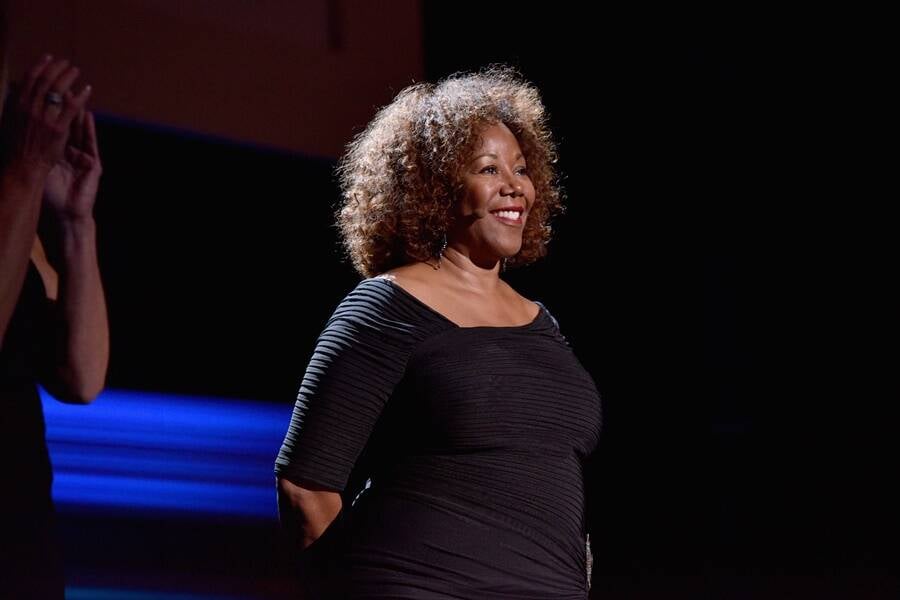 Bryan Bedder/Getty Images for GlamourRuby Bridges is still alive today, and she continues to work as an activist for racial equality.

The story of six-year-old Ruby Bridges remains one of the most memorable moments from America’s civil rights movement. But Bridges wasn’t the first Black student to desegregate a school in the Jim Crow South.

Just a few years before she began attending the all-white elementary school in New Orleans, nine Black students enrolled in an all-white high school in Little Rock, Arkansas in 1957. They were dubbed the Little Rock Nine.

The group faced the same racist vitriol as Bridges, which resulted in the infamous photo of Black student Elizabeth Eckford being screamed at by Hazel Bryan, a white teenager, as she walked to school.

But even though Bridges wasn’t the first Black student to desegregate a white school, her story still had an enormous impact on civil rights activists — especially because of her young age.

In 1964, Norman Rockwell depicted the story of Ruby Bridges in his painting The Problem We All Live With. Later, a number of films and documentaries were made about Bridges, including an eponymous TV movie in 1998.

By 1999, Bridges had established The Ruby Bridges Foundation to promote change through education. And in recent years, Bridges has continued to work as an activist and remains a living icon of the civil rights movement. Her story is a potent reminder of America’s painful history — especially since her past is not as distant as some may assume.

When asked what wisdom she may have to impart on future generations, Bridges often invokes Martin Luther King, Jr. “You absolutely cannot judge a person by the color of their skin,” she said. “You have to allow yourself an opportunity to get to know them… None of our kids come into the world knowing anything about disliking one another.”

Now that you’ve learned about the story of Ruby Bridges, take a look at these 38 unbelievable images of schools right after integration. Then, relive the U.S. civil rights movement through 55 powerful photos.

It is just too much!

0
"I split the belly of the mother shark and found three pups in the stomach. Two were like the mother and this one looked...
Read more
Weird

Amid COVID-19 Pandemic, Flu Has Disappeared in the US

0
This article is republished here with permission from The Associated Press. This content is shared here because the topic may interest Snopes readers; it...
Read more
Weird